1. General data about the employment and unemployment in the cross-border area Romania-Bulgaria 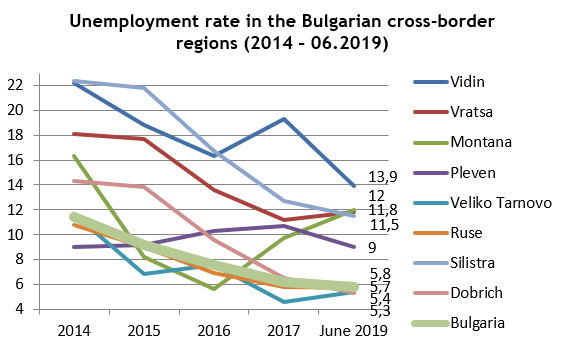 In the Romanian regions, such large amplitudes in the unemployment rate are not observed throughout the years, as in the Bulgarian ones. Differences between individual areas are also smaller than in Bulgaria. Constanta (1.9%) and Giurgiu (2.2%) have a lower unemployment rate than the average for the country (3%). The highest unemployment rate is in Dolj County (6.9%). 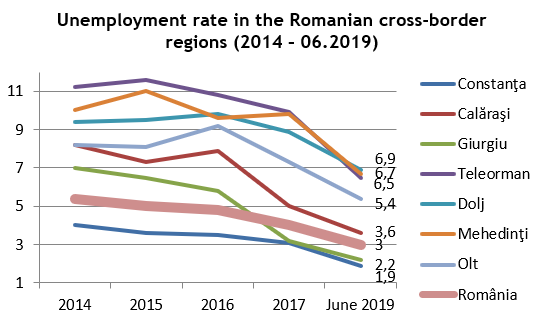 Most of the Bulgarian cross-border regions have an employment rate that is lower than the average for the country (67.7%). Only Ruse has the same value.

Almost all Romanian cross-border regions have an employment rate, which is lower than the average for the country 2018 (68.7%). Teleorman has the same value. 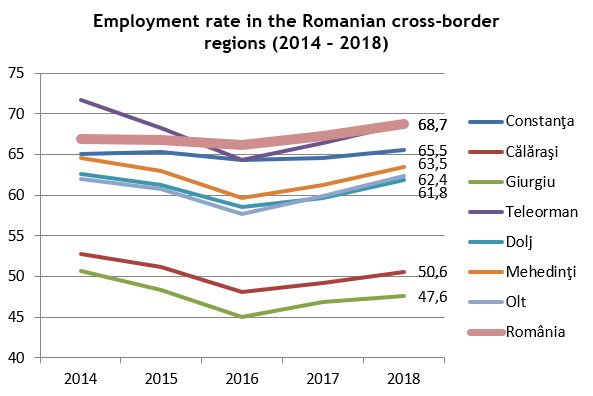 2. Level of wages in Bulgaria and Romania

The average monthly wage in Bulgaria during June of 2019 is BGN 1253 (640.66 euro), and in Romania - RON 5127 (1079 euro) according to data from the National Statistical Institutes. The wages in both neighboring countries are highest in the IT sector, where there is constant hunger for specialists, while the lowest wages are in the „Hospitality and restaurants“ sector.

The highest wages in Bulgaria are in Sofia, also being the only ones which are above the country's average. The lowest wages are in the districts of Vidin (part of the cross-border area), Blagoevgrad and Kyustendil.

In Romania, the highest salary is in Bucharest, followed by Cluj, Ilfov and Sibiu. The average net salary has increased the most in Arges, most likely due to employment in the sector of automotive parts and equipment. The lowest wages are in the counties of Teleorman (part of the cross-border region), Yalomita, Braila and Harghita.

The table shows the level of wages in the cross-border region for June 2019 compared with the average for the country and the highest, which was recorded in the capitals of both countries. 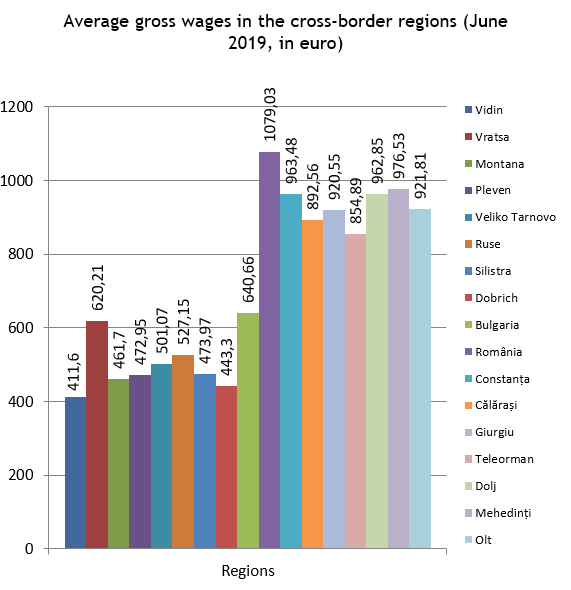 Information about the most wanted professions

3. Information on attitudes towards and expectations from labor mobility

We, from the VISA Agency, conducted a study (in 2017) about the Bulgarian and Romanian businesses' needs of personnel and the companies' attitude towards cross-border labor mobility, as we asked 150 companies, and reached the following general conclusions: